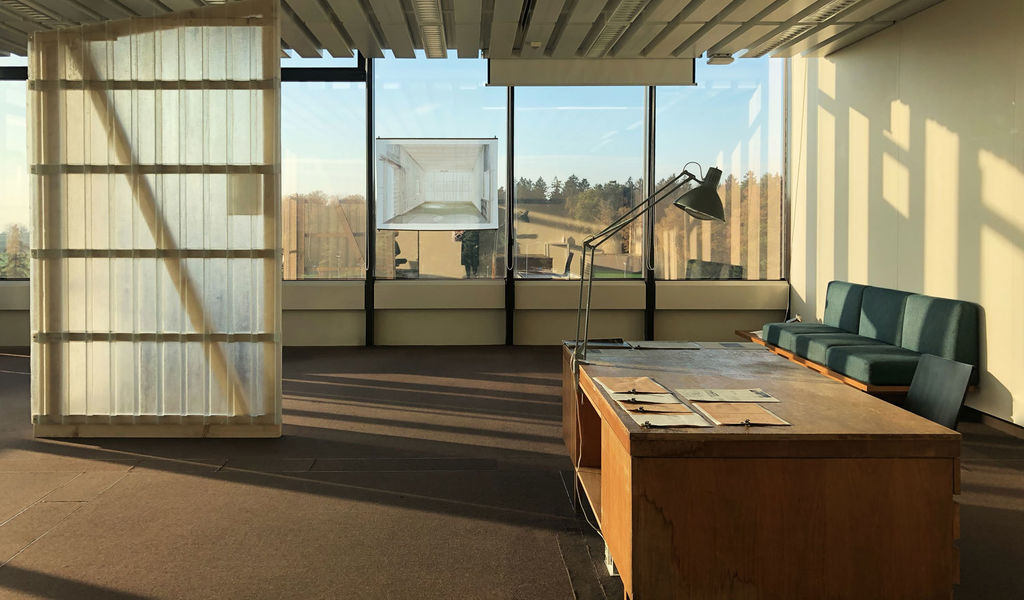 «We want the ETH to be better»

Organised annually by the Parity Group, a loose assemblage of students and staff at the ETH, the Parity Talks were initiated in 2014 as a reaction to all male teaching teams and all male critique panels. A small group of teaching assistants gathered signatures and took the complaint to the department conference, demanding that a platform for discussing gender and diversity in the department be enshrined into the academic calendar. This October the fifth Parity Talks entitled ‹Actions and Accountability› took place. ETH-students and co-organisers Sara Sherif and Jeanne Casagrande catch up with Amy Perkins, who took over the organisation this summer, to consider the role the event has within the school and beyond.

Amy After the fourth Parity Talks everybody wanted to celebrate the fact that these topics were brought to a wider audience. But there still is a long way to go. The first Talks in 2015 were mostly organised by assistants, with a few students coming on board. It didn’t really gain traction, until the ‹MeToo›-movement made clear that something needed to change. The first Parity Talks produced ‹9 Points For Parity›, a list of actions to help the department work towards fairer chances for everyone. Looking back only three of these have been implemented – despite the «wall having fallen». Now this fifth instalment was trying to broaden the topic into areas which effect everybody in the department. Five years on and to still be talking about implementing actions and accountability, is a bit disappointing.

Jeanne I started my studies in 2014, back then there was still a majority of male design professors, we didn’t have a lot of choice in that respect. In the last six years a lot has changed. At this year’s Parity Talks the involvement of the students seemed to be greater.

Amy Yes, the talks this year were very well attended. They were diverse, in terms of voices and topics. Students didn’t have to be interested in gender and diversity to attend a discussion on critique practices for example – how design juries are carried out generates a huge part of the culture at the department. That broadened our audience a lot. Sarah Springman, the Rector, attended, as did the deputy and future dean, Tom Emerson, and Martin Delbeke, the director of studies. Despite all of these positive aspects, there was a general feeling of frustration from all the workshop organisers due to the time restriction of having to fit these discussions into just this one day in the year.

Sara We invested a lot of work for the preparation, and then it was over very quickly. People often forget that here is a huge amount of donated work behind the Parity Talks.

Amy It’s a big event, and it disrupts the teaching, giving the talks a visibility, this day is important and also celebratory. At the same time, the fact that equity and awareness of privilege is not discussed throughout the year, is something which needs to be addressed.

Sara It’s a problem that the excitement is due to an exception. The joy generated doesn’t last for long and we have to relatively quickly go back to normal. Rather than parity being on the table every day as an inherent part of the curriculum.

Amy With the Innovedum application, we are trying to do that. We had an open call in the department for proposals for new courses which relate to gender and diversity. They range from lectures to seminar weeks and studios. If it’s successful, about twenty of these courses will be funded for four years. We’ve had long discussions about how you manage to get people to engage who wouldn’t normally. And making these courses available is one step. So, for every core course you have to take, there would always be an option which deals with equity and diversity. It also gives a lot of younger academics and teachers an opportunity to build their experience as teachers, because often it’s hard to get the chairs to fund anything which is not directly part of the professor’s interest.

Sara Coming back to the time invested voluntarily by the forty people of the Parity Group; will there be a paid position to work on these topics?

Sara If the department pays someone to listen it will show students that when they speak up about something it will be taken seriously, they would feel more comfortable to speak up. As it is, they rely on the luck of having a nice assistant, who they can tell if they feel uncomfortable with something. If they have bad luck, they have an unapproachable professor and indifferent assistants, and feel uncomfortable for the rest of the semester.

Amy There’s also a lot of work in terms of policy writing, which the department has just not done yet. There’s a lack of clear procedures about complaints. But fundamentally, it’s lacking someone who goes out, finds information and listens to people, both students and assistants. That’s something which is currently being done by members of the Parity Group or the Parity and Diversity Commission. And we aren’t actually qualified to be either counsellors or advisors.

Sara That’s true, and it also has to be said that to do it right takes time – following up on things and giving them the energy they deserve is a lot of work.

Jeanne At the moment we are around 40 people in the Parity Group. If we want to expand the agenda to a larger scale, there needs to be a paid effort. Otherwise we all end up doing this in our free time and that’s not sustainable, we are all a bit burned out.

Sara And in the end it is often women who are doing the majority of this labour based on goodwill.

Amy What was really great at these recent talks was the physical impacts they were having in the department. Until the end of this year we now have a space in the HIL-Building for discussion. An exhibition about the architect Berta Rahm, and her pavilion for the Saffa Exhibition is currently set up by students and assistants in the space. Also, there is now a section in the library dedicated to Parity and Diversity – it’s just a beginning, but it is growing.

Sara The Parity Talks are sometimes criticized for talking about the same things every time. And of course we are, because things still aren’t changing. It started as a place of discussion, now it should become a place of action. In the end we shouldn’t need to talk about it anymore, it should just be embedded in the DNA of the school.

Amy It is often the case that these topics circulate within a set group of people.  We need to be more visible and reach a broader audience, both inside and outside the department. It is not just the ETH that has a problem, it reflects problems in Swiss society, for example access to education. On the face of it, it’s an extremely fair meritocratic system, but that neglects the fact that not everyone is starting from the same place. A diversity officer could also have the role of reaching out to people in order to encourage a more diverse range of people to consider the ETH as an option for their studies.

Sara If the education system is actually working, then how come there isn’t more ethnic diversity at ETH?! The ETH in no way represents the diversity of the city of Zurich – or Switzerland more broadly.

Amy There are systemic problems within the school system, but also within the ETH. There are gender problems, but also diversity and class problems. One third of the students leave after a year. The teaching approach is to say that they are just not tough enough, which is joke!

Sara If you have to work alongside your studies, in the first two years especially, you can forget it. The institution exposes you to a huge mental overload. The expected attitude of overworking yourself is quite violent and can often lead to mental health issues.

Amy Education isn’t a strength test. Excellence isn’t about how mentally strong you are, or where you come from, or if your family can support you. The recent ‹WiegEHTs Survey›, which is not yet published externally, showed that Architecture students are more likely to experience symptoms of mental illness then other courses at the ETH and that this effects LGBTQ people, women, and non-german speakers most. Excellence isn’t achieved through struggle, it should also be about good teaching and intellectual rigour and the joy of enquiry. The 60-70 hour work weeks currently undertaken on average by architecture students is putting them under huge mental strain and doesn’t create a healthy environment to learn in. The leadership of the school is against it, and the department is an outlier within the ETH.

Jeanne Coming back to the next steps for the Parity Group: It boils down to how to make this paid position more official within the school without cutting the activist element behind it. Furthermore, we need a dedicated space, a wider range of books in the library, and projects initiated by the students, supported by this new position.

Amy This activism is not going away, because the problem remains. And as long as the problem remains, students and assistants will be trying to change it. I keep coming back to the problem that we aren’t moving fast enough – should the department be deliberately hiring more women to achieve a professorial body more representative of the undergraduates entering into first year?!

Sara The problems are becoming increasingly obvious to people. White male professors are starting to be more aware of the privilege they have. There is a change of sensibility.

Jeanne But we need a stronger structure which can carry the discussion. We don’t want to achieve 50/50 and then just lean back, it’s a movement and an attitude rather than an end point –that needs structural support.

Amy When we look back at votes for women now, it’s almost too basic to talk about. I’m sure people will look back in the future and think, it’s great that they were fighting for 50/50 representation in the teaching staff, but they will feel disbelief that this was the major issue.

Sara Looking back on how it was when we started the Parity Talks, and now that we’re going to leave the school, I feel a bit like a mother watching her baby growing and taking its first steps.

Amy It’s really important to speak about that pride you feel. These topics can often be seen as people fighting against the institution. But that shows how you care deeply about the institution, you just want it to be better.

Sara Sherif,
is currently pursuing an MSc in Architecture at ETH Zurich and was an editor of trans magazine. In 2019, she founded the podcast Archive Vivante with Anne Lacaton and Jean-Philippe Vassal as her first guests. This fall, together with Jeanne Casagrande, she started her free diploma at the chairs of Elli Mosayebi and Tom Emerson.

Jeanne Casagrande,
is currently completing her Msc in Architecture at ETH Zurich. Together with Sara Sherif she started her free diploma this fall at the chairs of Elli Mosayebi and Tom Emerson. She was a co-organizers of the workshop ‹Table manners: Investigating Structures of Critique during the fifth Parity Talks› and contributed to the exhibition ‹Making space› for Berta Rahm.

*Jeremy Waterfield studies Architecture at ETH Zurich and is a co-editor of trans magazine.